Jumanji: The Next Level

welcome to the jungle

What do you get when you combine live music performed by top artists and a photo booth that’s themed around the tenth highest-grossing film of 2019, that is activating in 10 different cities across the US in a time-span of 22 days?

A Whole. Lot. Of. Awesomeness.
(With a little exhaustion.)
But mostly awesomeness. 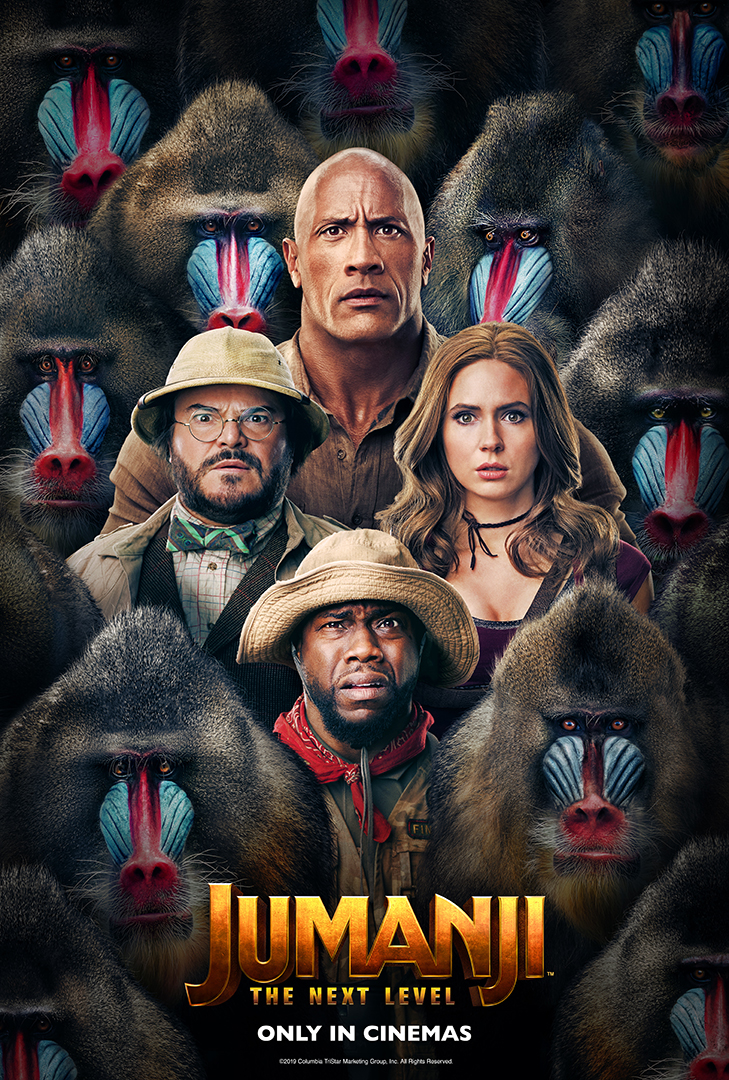 With this being our fifth consecutive year working alongside iHeartRadio during their annual December Jingle Ball national tour, we have executed SO MANY different types of photo marketing strategies for a wide range of clients. One of our biggest ones to date being Jumanji: The Next Level. (I’ll admit, I was a little hesitant in seeing these modern-day remakes, worried that it would dishonor the 90’s classic and the greatness that was Robin Williams, but I was SO glad I did.) It’s one of those movies that literally gives you an ab-workout from laughing so hard (plus The Rock is in it, with a sprinkle of Nick Jonas. Enough said.)

For their photo activation, Sony wanted to utilize the movie’s 4 main scenes and imagery: 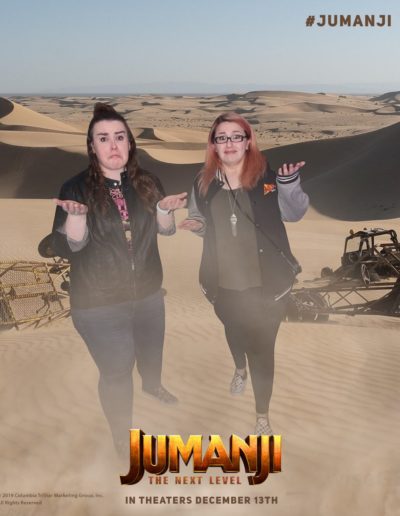 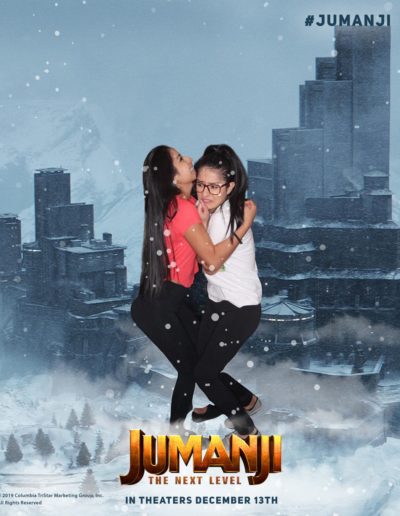 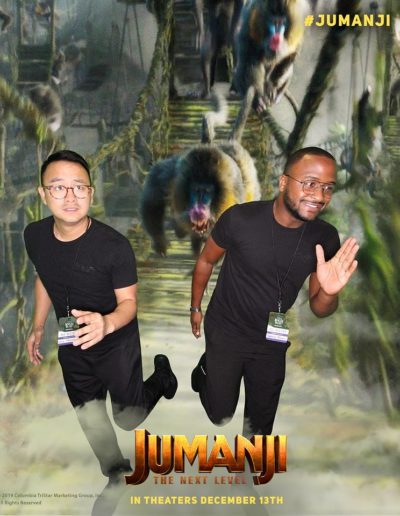 It was a no-brainer that our green screen services was the way to go here. AND, to add even more fun, we made it so the scenes were picked at random so they didn’t know where in the game their photo would portray (we did guide them with their posing though, because I know that I don’t want to be standing around when there’s a group of vicious screaming monkeys lunging towards me.) 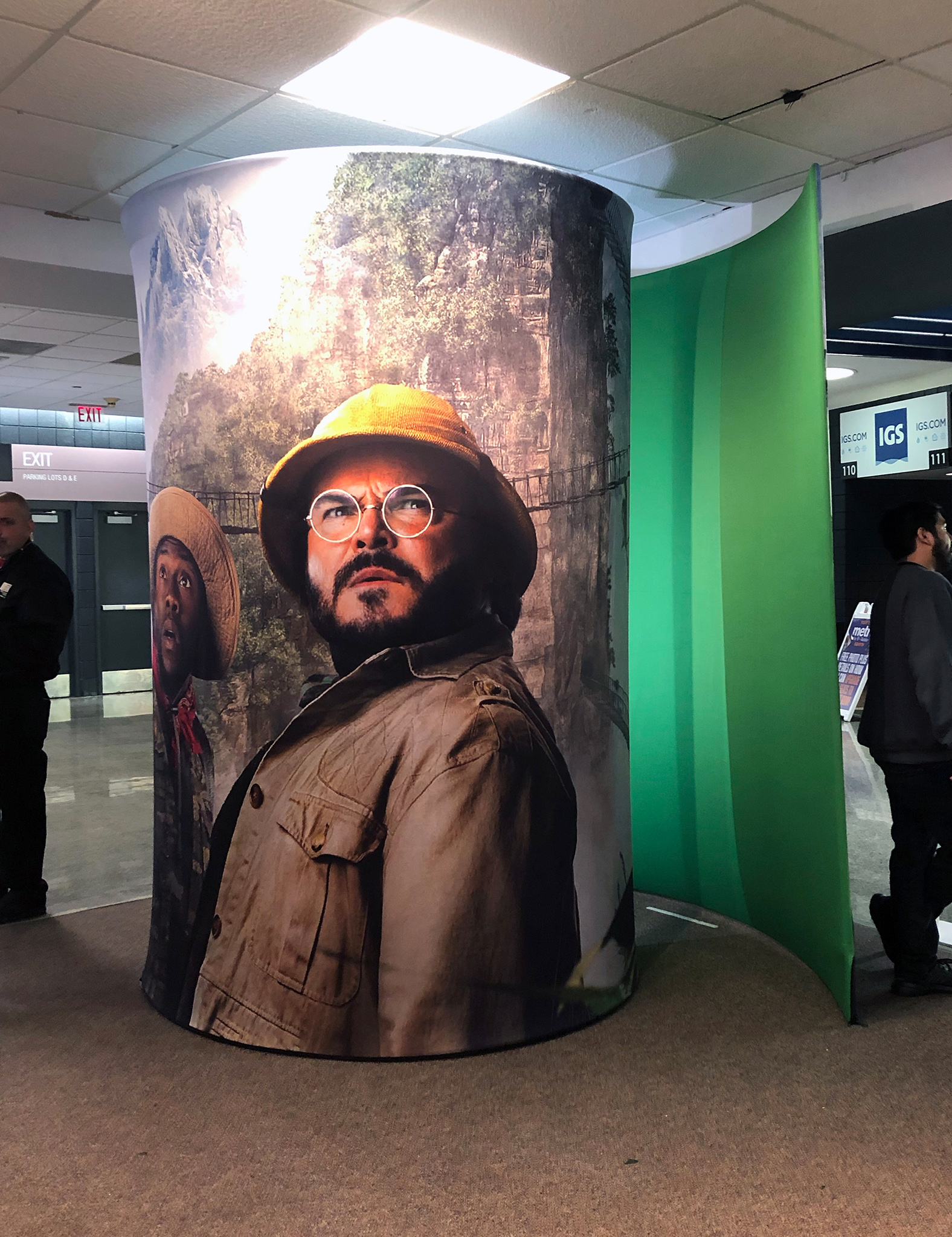 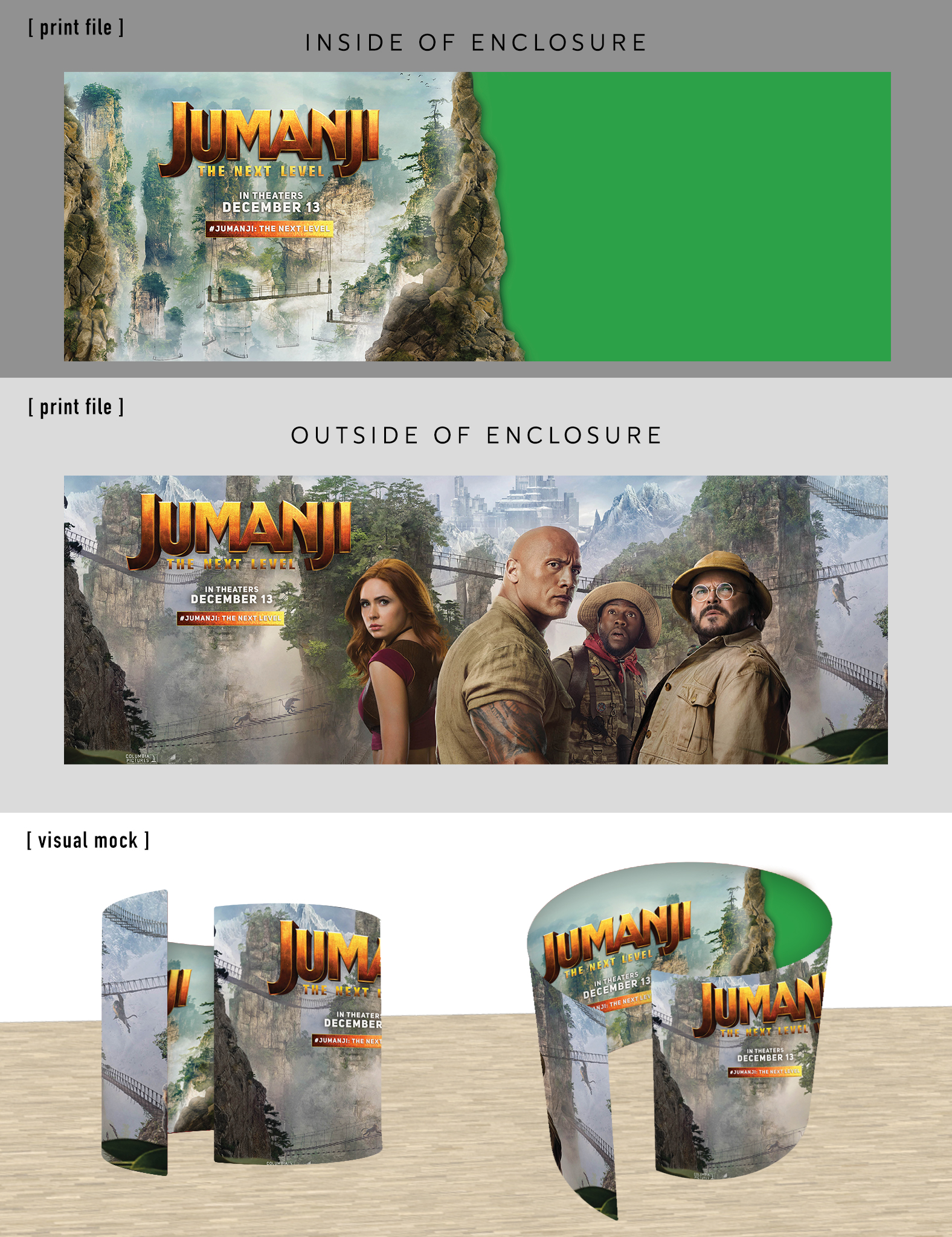 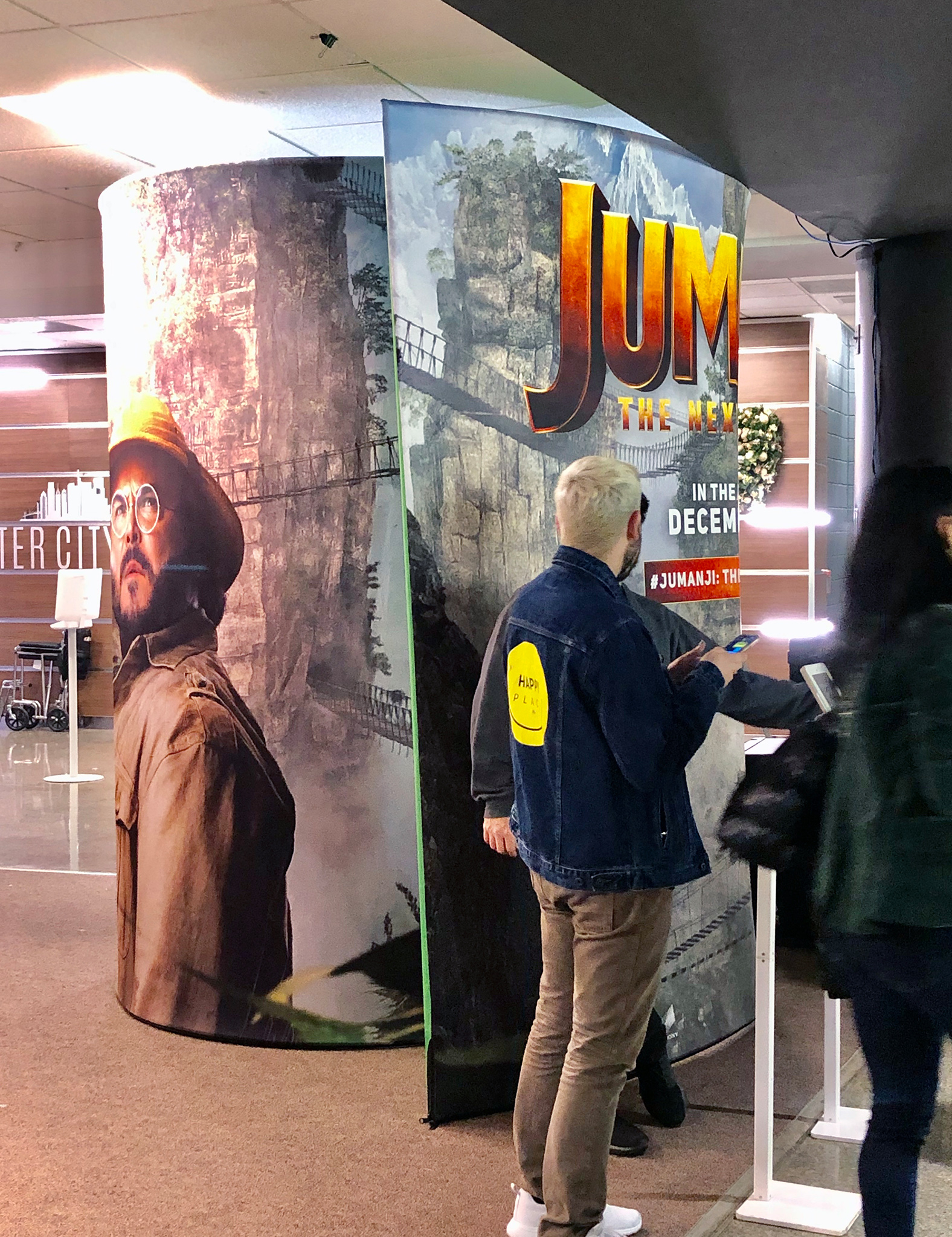 We were excited to find out that within Sony’s budget for this photo-op, they were able to add on a couple fun extras to REALLY draw in the people.

• An enclosure structure branded with the film’s assets, catching the eyes of the concert-goers as they rush to their seats or wait in line for merch. This really helped pull the whole thing together. (TWO different enclosures actually but I’ll get to that later.)

• A screen on the booth to pop up at random, giving people a free Fandango movie voucher to go see the movie! Obviously this was a big selling point in getting foot traffic. Everyone loves free stuff.

• A branded, jungle-leaved vinyl skin that wrapped around the outside of the booth

After working the first 2 cities, we quickly realized that our mini 360 enclosure structure might not have been the best choice to acquire the maximum amount of photos. On top of it being a little on the small side, people couldn’t see the photo booth inside of it from the outside, making it not-so-obvious that it was in fact a photo-op. This required extra effort in getting people inside of it to take a photo. You know that phrase about a stranger luring children into their van with candy? Imagine the jokes we heard as we’re convincing people to step inside. So we thought Yup, we need a new one.

We were able to quickly produce a new structure to use for the rest of the tour which worked out SOO much better! It was an open, curved backdrop, still branded with the same movie assets, while having the photo-booth visible to the people. This helped increase foot traffic tremendously, making it a win-win for both us and the client. An added perk to this one that the client really liked, was that we started using new software technology that was able to digitally replace the background, without an actual greenscreen! So instead of the backdrop being solid green (and an eye-sore,) we were able to use a cool image from the movie which made the whole visual representation of it much more pleasing. 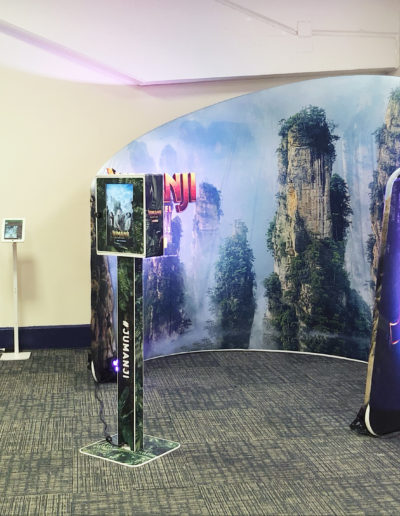 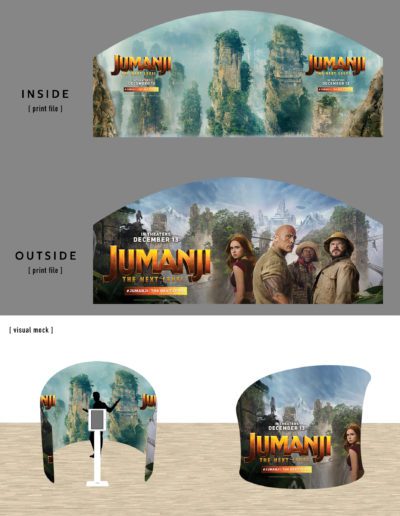 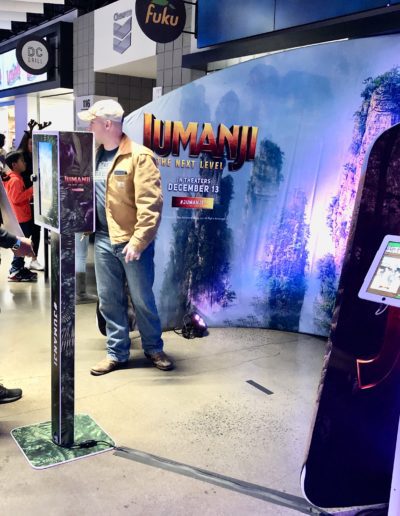 We had to split our staff up into 2 teams to combat this national activation tour. It was a lot of flying, last minute changes, drastic weather differences, late-night fast food, and aching backs. But at the end of it all, the fun memories we were able to make along with the new relationships that were made among us and the clients, made it all worth it. I guess the new lessons that were learned along the way which helped our personal growth as photo booth marketers is important to mention as well 😉

Take the next step

Manage Cookie Consent
To provide the best experiences, we use technologies like cookies to store and/or access device information. Consenting to these technologies will allow us to process data such as browsing behavior or unique IDs on this site. Not consenting or withdrawing consent, may adversely affect certain features and functions.
Manage options Manage services Manage vendors Read more about these purposes
View preferences
{title} {title} {title}